← more from
Redefining Darkness Records
Get fresh music recommendations delivered to your inbox every Friday.

by Crush the Altar 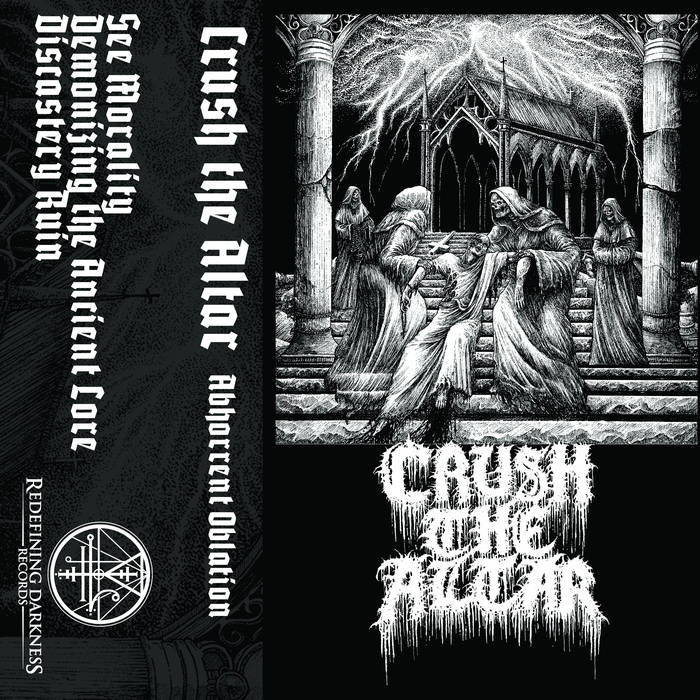 pimpstick This is the reason I love Metal. This EP right here.

Televiper Crush The Altar pour more gasoline on the raging underground bonfire of modern thrash with a raw, dirty demo that sounds as if buried beneath the compost of decades disregard. If you swore by what Hypnosia did, or what Ripper does, dig this up.
Favorite track: Demonizing the Ancient Lore.

"With three tracks behind the title, this offering is a ripping and flesh shredding beast that comes packed with slicing memorable riffs that are only to be backed by solid bass work, pounding drumming and larynx shredding vocals. From track one to track three you become subject to a maelstrom of sinister and down right malevolent metal. Never are you really gifted a moment of solace as Crush The Altar comes at you in waves, ushering forth track after track of brain bruising thrash."
- Cadaver Garden
cadavergarden.com/2019/03/28/crush-the-altar-abhorrent-oblation/


"Dealing with a style of Thrash that is more primal than technical, Crush the Altar channel the crushing grooves of "Beneath the Remains"-era Sepultura superbly. The powerhouse drumming and well balanced production job ensures that each track on this demo packs low-end punch and razor sharp thrust, even when the tempo is kicked down a notch or two"
- Riff from the Crypt
riffsfromthecrypt.wordpress.com/2019/05/31/crush-the-altar-abhorrent-oblation/?fbclid=IwAR1ObbL9iPLBIPQD6zwaWTwgGVARTdtOYXUF5elkMGsEa0c7V62z7rO9Esg

"Throughout his compositions we are faced with riffs that intermingle the Thrash Metal of the 80s with the Death Metal of the early 90s; they also add razor-sharp guitar solos and really killers. "
- Broken Tomb
www.brokentombmagazine.com/2019/06/01/critica-crush-the-altar-abhorrent-oblation-2019/?fbclid=IwAR1C7deCNm-EUroMHvTPomqxWNhGSS4NzP9WceJc2e-Fo8tuRDNjYsbU4E4

"this aptly-named blackened death-thrash trio bring as much Vader and Morbid Angel influence to the table as they do Sepultura and Sodom. Whether you like your riffs razor sharp or pummeling, Crush the Altar has you covered on both ends....Abhorrent Oblation is some of the most brutal underground thrash you’re likely to hear all year."
- Indy Metal Vault
www.indymetalvault.com/2019/06/13/demo-review-crush-the-altar-abhorrent-oblation/

"New Jersey's Crush The Altar have produced a powerful first demo. "Abhorrent Oblation" is sixteen minutes (three tracks) of old school-style death-thrash. On the death metal side of things there are hints of Morbid Angel and Vader, and on the thrash metal side there are Sodom and Sepultura influences. The net result is an offering which could be filed next to bands like Captor, Krabathor and Agretator.
- Dead-Metal
deadmetalmusic.blogspot.com/2019/06/under-radar-crush-altar.html?fbclid=IwAR0AUvveH5eRq0GJlOQFM7VK1KNrepf0DvqLzreAsma3sy7UE_4EWCSJ-l0

"Pistons-popping rhythms rule the day here, with some slower breakdowns added for effect, along with some lower register growls dragging you further down into the muck. Good production here as well, guitars abrasively gnarly and drums in your face. Good stuff."
- The Mighty Decibel
www.themightydecibel.com/single-post/2019/06/05/DEMOEP-ROUNDUP---Crush-The-Altar-and-Beholder

"In my opinion Crush The Altar are a very great sounding mixture of blackened thrash and death metal and if you are a fan of those musical genres, you should check out this band. RECOMMENDED TRACK "Demonizing the Ancient Lore'. 8 out of 10.
- Bringer of Death Zine
bringerofdeathzine.blogspot.com/2019/05/crush-altarabhorrent-oblationredefining.html

Crush the Altar was formed in 2018 around the Philadelphia/Jersey border. Admittedly influenced by early Vader, Morbid Angel, Sepultura, and Sodom, Crush the Altar have forged their own special blend of Blackened Thrash with Death Metal elements. With the Blackened Thrash Movement at it's height with bands such as Midnight, Hellripper, Bat, Whipstriker, and Speedwolf, Crush the Altar bring a freshness with a bit more of a modern sound executed with frightening precision.

Bandcamp Daily  your guide to the world of Bandcamp